Between them, Chris and Steve have run over 100 000 miles. Unfortunately Steve has left it to Chris to run most of them...

Chris Finill was born in Harrow in 1958 and has been a competitive runner since the age of 12. After moving up to Ultra distance (races longer than the Marathon) he
won the English Championships at
100 kilometres and 24
hours in 2003 and 2008 respectively and has represented
Great Britain 8 times in these events.

Chris is the only person in the World to have run all 31 London Marathons in under 3 hours, a feat which was recognised by the Guinness Book of Records in 2009.

His personal bests are:


Chris is widely renowned on the Home Counties cross country circuit for his uncanny knack of getting to the post race tea and cakes way before his fellow competitors have even realised that such things are on offer.

Steve Pope was born in St. Helens, Merseyside in 1966 and studiously avoided taking any serious exercise until he started jogging at University in 1985. After a while, it dawned on him that although he didn't have the leg speed to set the marathon world alight (the only Kenyan he ever beat was Barack Obama's granny), he could keep going for a long time.
With this in mind, he decided to move up to the World of Ultras and had more success, winning several events including the Barry 40 mile race, the Thames 50 and Tipton 12 hours, partly by dedicated training but mainly by phoning up any good runners the night before to tell them that the race had unfortunately been cancelled.
His best results to date are:
Half Marathon: 1 Hour 15 mins  (2010)
Marathon: 2 Hours 41 mins        (2011)
12 Hours: 85.5 Miles                  (2011)
Anyway, enough bragging- here's a few pictures of us (to set the ladies' pulses racing)
Chris representing England at the Commonwealth Games
demonstration 24 hour race at Keswick in 2009. 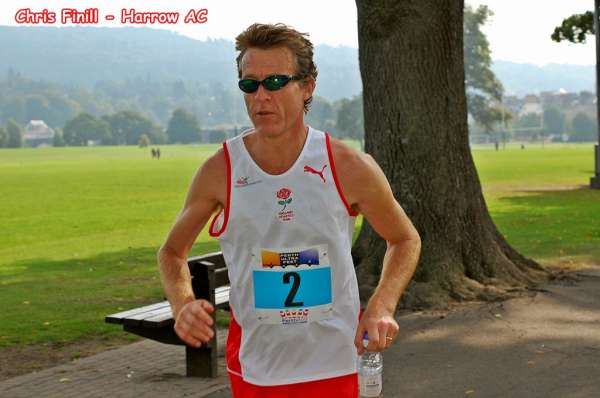 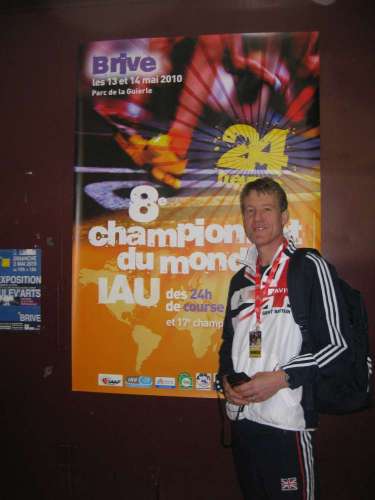 Steve finishing the Dublin Marathon wearing shorts that appear to have one leg longer than the other. 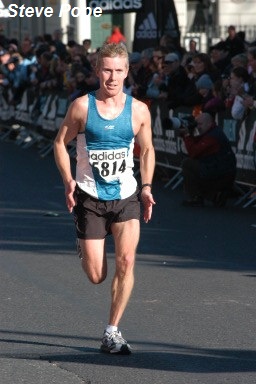 Steve running in the snow with Jeffrey 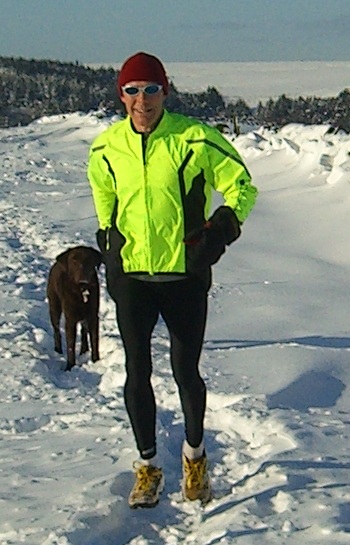 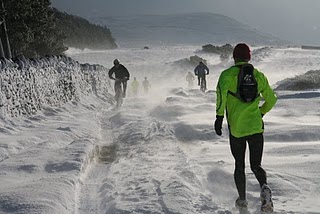 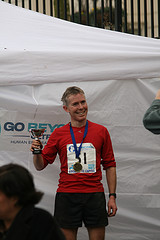 We are very fortunate to have a back-up team to look after us- Ben Southern and Julia Finill:
Ben 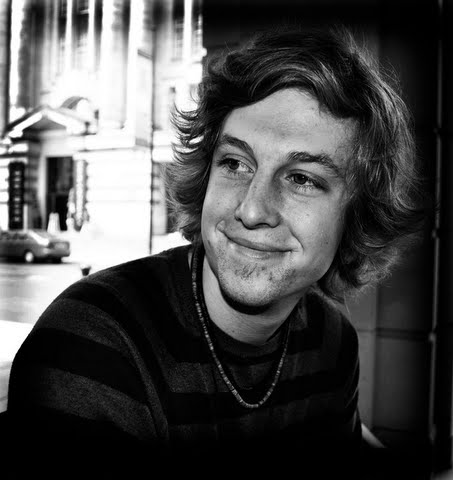 Ben in his own words:
I am currently twenty two and studying Film and Television Production at the University of Cumbria, where I hope to hone my skills to eventually become a film editor. I have watched and appreciated film since a young age, but only in the last three years or so have started to take this interest seriously as a possible profession.
I started out by making extreme sports films based on myself and my friends. A natural area to venture into when you play these sports yourself, and it wasn't long before I had a small collection of mountain bike, ski and skateboard films under my belt. The whole filming process was fun, but what I really loved doing was putting the movies together through editing. I got a sense of deep satisfaction and creative freedom, every time I sat down to try and put together the footage I had collected, into a watchable film.
Both photograph and film are very valuable to me, as they are a perfect way to look back upon your treasured moments and memories. Years on when you come across an old photo album or home made film, the memories and feelings form that time come flooding back, and you are reminded of the things which have brought you happiness. I think that it was this nostalgia which gave birth to my love for documentary film. The focus on the journey and emotion of an individual being very deep and powerful subject matter in my eyes.
Imagine my elation then, when I was presented with the chance to watch such a journey of two individuals unfold as they chase their dream across the United States.

A while ago, Steve asked me to write a few lines about myself to put onto the website.  Well, here we are 18 months later, 5 weeks into the run, and I have finally got around to it!
I am 51 years old, and have been married to Chris for the past 26 years (we celebrated our anniversary whilst in the desert on 31 August!).  I work for rhw Solicitors LLP in as a legal secretary in the family department;  the firm has very generously sponsored part of this trip.  At this point I would also like to thank Julian McEvoy, for whom I have worked for the last 15 years, for considering and granting my request for 3½ months off work.  I hope my replacement isn’t so good that you don’t want me back!
My role on this trip is mainly as Transport Manager – ie I am the sole driver of the vehicle, which is a Chrysler Town & Country van, a 7 seater people carrier..  The vehicle itself is absolutely brilliant for our needs   It is a pleasure to drive and has many little luxuries which I am really going to miss when I get back to driving our VW Golf and Mercedes A Class in the !  The original plan had been for Ben and me to share the driving, but as Ben is under 25 years old, that was not possible to arrange.  The down side of this is that I cannot join Chris and Steve for any part of their run, so my plans to arrive back in super-fit from running 5 miles each day are not going to happen!
So far my reading material for the trip has been Meditations From The Breakdown Lane: Running Across America by James Shapiro, and On The Road by Jack Kerouac.  It is easy to see that the concept of travelling from one side of the to the other has definitely got under my skin!  Now there is just the small matter of doing it!