The final day featured another bit of the Grand Union Canal followed by a short stretch of the Thames Path, blazing sunshine and Steve feeling decidedly unwell about halfway through the afternoon. A pint of milk, a few veiled threats and a cup of tea kindly provided by our film maker Ben Southern, soon got him back on his feet again and by six o' clock we arrived triumphantly at Finill Towers.

To sum up: it didn't kill us and we could certainly keep going, (although I've no idea for how long.) Legs feel stiff and right Achilles is a little puffed up but nothing serious. The mileage was further than we need to do in America, we had no backup (and we carried rucksacks), but we didn't have to face the heat of the Nevada desert or look out for snakes. Steve lost 3 pounds in weight over the 5 days so a rough calculation indicates that he should return from America weighing 6 stone.
Posted by Steve Pope at 03:06 1 comment:

Giles kindly gave us a lift back to yesterday's endpoint and we continued down the Grand Union towards Harrow where Chris's friends were no doubt celebrating their good fortune to be putting us up tonight.

An easy day today of just 41 miles. Chris is glowing with lack of sun lotion.
Posted by Steve Pope at 05:05 No comments:

I awoke to grey skies and a slight feeling of seasickness from sleeping on an inflatable bed. With my contact lenses in, the pouring rain became evident. However it takes more than a bit of drizzle to stop Pope and Finill, so off we set down the Grand Union Canal towards Milton Keynes where Steve's friend Giles had kindly been bullied into giving us a night's accommodation.

My feet were completely soaked within two minutes of running along the canal towpath, so it was some while before I realised that my trainers felt slightly loose. This puzzled me, as I was expecting my feet to swell slightly with all the miles and I stopped to investigate. The reason soon became apparent. Jez had thoughtfully removed the insoles from my shoes to enable them to dry better when he put them next to his boiler. Unfortunately he had forgotten to put them back in before he handed them to me the next morning and I had foolishly not noticed.

The 'Mizuno' imprint on the soles of my feet is still visible. I should ask them for sponsorship...

Things soon brightened up as we came across a barge operating as a cafe which provided Steve with the opportunity to eat more buttered toast along with eggs, mushrooms beans and sausage. Happy Days.

Milton Keynes appeared and then inexplicably faded from view as unbeknown to us the canal follows an extremely wiggly path. We asked a fisherman how far we had to go and he replied '4 miles'. This cheered us up no end and we pressed on, however when we asked another couple about an hour later, they claimed that it was now 6 miles! As we clearly had no idea where we were and it was after 8pm, we phoned Giles who took pity on us and drove out to pick us up. It turned out that we were only about 3 miles from his house and had completed 55 miles.
Posted by Steve Pope at 07:26 No comments:

We headed off to Warwick, where we had invited ourselves to stay with Ultra Running Legend Jez Bragg. Today's journey was all on the road, varying from nice, quiet country lanes to the Coventry Ring road which we somehow ended up on within minutes of handing Chris the map. Once again the weather was lovely until we arrived at Kenilworth, where Jez arrived to meet us and it started to rain.

After taking one look at Steve, Jez assured us that it was only 2 miles to his house. After 45 minutes, we came to the conclusion that we were either incredibly slow runners or he had taken optimism to new heights. Eventually we arrived at Chateau Bragg where he had kindly laid on a barbecue in our honour and put Steve's trainers in the airing cupboard to dry. (This is significant- see next post)

Great Training Idea #2 The Run From Sheffield to Cranleigh

We decided to run from Steve's house in Sheffield to Chris' home in Cranleigh, Surrey. It just seemed like a good idea at the time. Anyway at 8 am sharp this morning, carrying the absolute bare minimum of gear, we set off from Sheffield in the sunshine and headed South. Steve expertly guided us on a picturesque route, mainly off road via Fox House, White Edge, Chatsworth House, and Matlock, following the Derwent Valley Trail into Derby.

On the south side of Derby lay the Bed and Breakfast Steve had pre booked. (To be honest it would be more accurately described as a 'Bed' because the owner explained very carefully that they did not provide breakfast. Indeed she seemed quite proud of the fact.) Nevertheless, it was conveniently situated near to a curry house and our room had a TV so we could watch another dismal World Cup performance by the England football team. We covered around 48 miles today and it was thoroughly enjoyable.

Here's the foolish pair setting off. They won't look quite so jolly by the time they arrive at Cranleigh... 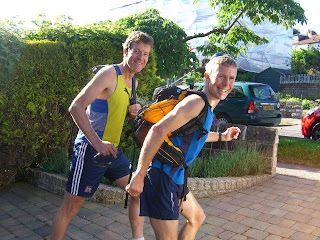