We are at Chris' sister's house in New Jersey for a few days rest before the flight home. We ran across in an 'official ' time of 79 days 22 hours and then completed the New York Marathon 15 hours later in 3.38 with a 12 minute negative split - We're pleased to have been able to taper for this event  with only 288 miles in the previous seven days.

As you can imagine there's quite a lot of sorting out to be done and below are a few photos which summarise different aspects of the run. 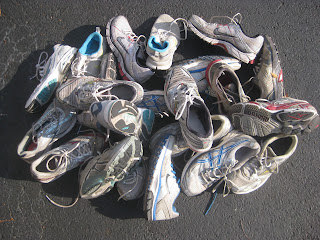 Although we wore out the equivalent of about three pairs each during the run we rotated several more pairs on top of this in order to limit the risk of injuries or blisters. 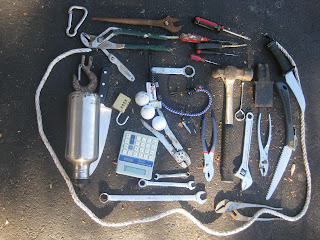 A feature of any run across America is that there's a lot of 'stuff' to find by the road side. Here are most of the tools we came across. The favourite is the posh Italian kitchen knife - luckily we didn't need to explain that one to the cops as we ran down Highway 6 with it. The calculator was a well timed find as we had been trying to work out 1727 divided by 43 not four minutes before we came across it. 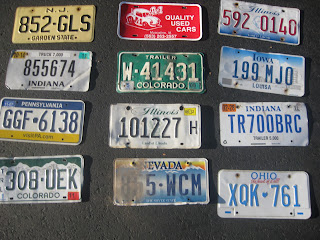 Licence plates from almost every state - I'm working on Nebraska and Joanna has waltzed off with the California one so I need to reclaim it..........
Posted by Steve Pope at 16:34